Alastair comes to the small Carterton School with more than 40 years’ experience from various educational roles both in New Zealand and overseas. But after 16 years at schools in the Philippines and the United States, Alastair is thrilled to be home.

When asked what made him decide to take up the South End post, his answer was quick and forthright: “Why not?”.

“It feels great to come back to a school like this. Wairarapa is a clean, green part of New Zealand and it feels good to be getting back to my roots.” 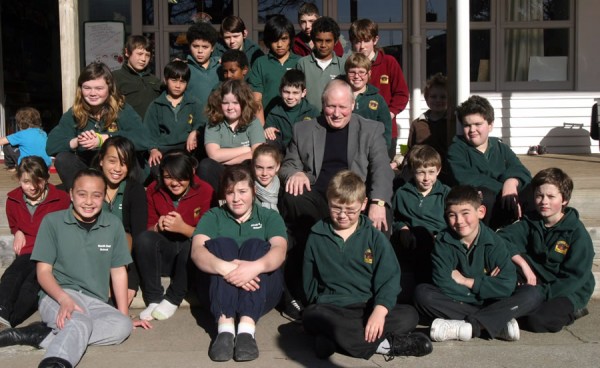 Growing up in Kumeu, then a small country town, just north of Auckland, Alastair’s first teaching job was in West Auckland’s Te Atatu North Primary in 1967.

“It was the second-biggest primary school in New Zealand at the time. In my first year I had 30 in my class, in my second year 42 – and I loved it. Te Atatu was a relatively new suburb which included many Polynesian immigrants. It was a bright and colourful community.”

Alastair always knew he wanted to be a teacher, although his parents really wanted him to follow in the steps of his godfather Lyndsay Papps, who was a senior partner at Bell Gully and Co and was solicitor for a number of the capital’s leading firms. “But they fully supported me with my choice of a career.”

From Te Atatu North Primary he moved around several schools in the Auckland area becoming deputy principal along the way.

After a couple of years he left the classroom and worked for the Education Ministry as an Inspector of Schools, overseeing 30 schools, the first deputy principal appointed to an inspector’s role. The job had only ever been held by former principals.

“It was our job to see what was happening inside the classroom. We were there to support teachers and deal with any issues. I lasted only a year because I saw so many good things happening that I wanted to bring them back to a school of my own.”

He got his chance when the principal’s position at Titirangi Primary School in West Auckland became vacant. In 1997 Alastair decided to take up a teaching post overseas, accompanied by his wife Mary and children Bryn, then Year 7, and Jessica, Year 4, and was offered the role of elementary principal at the International School of Manila in the Philippines.

“It’s a huge school with more than 2000 student.s I was in charge of 922 elementary students and 80 teachers from all around the world.”

At the private school Alastair was introduced to the International Baccalaureate (IB) programme.

“There are shades of the Montessori system around the programme in that students are able to select what they want to learn up to a certain point. What was originally going to be a one-year contract turned into a six-year stay because I loved it so much.”

His next move was to the Beacon International School in Manila where, as headmaster, he was involved in introducing the IB programme to the primary and middle school.

“It was really successful and the kids just loved coming to school. The programme is very much about getting them to question everything with the aim to develop them into global citizens.”

Four years ago the family moved to the US when Alastair became elementary principal at the International School of Indiana, again to to set up the IB programme in the junior school.