Last Friday, four South End Montessori students woke early to make the two hour trip to the Kimbolton Chess Tournament. They expected to face strong competition, especially from the Feilding Intermediate students who had been coached by local Grandmaster Mark Noble. The tournament originally anticipated having 85 players, but chess is obviously on the rise: they ended up with 144 students competing! 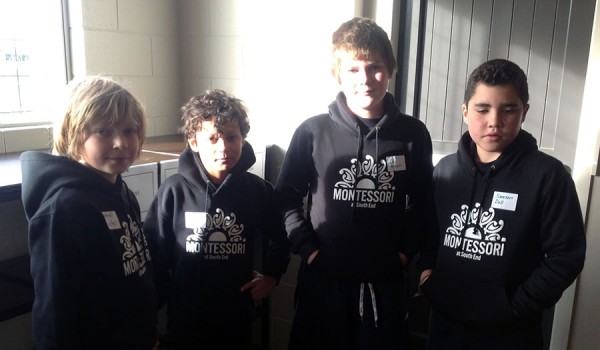 Our crew of four had been attending a chess club at the fantastic new Carterton Events Centre, and under the guidance of David Shead, David Capper and Marlon Tortoza, they’d become stronger players and worked hard on their games. The Kimbolton tournament would be a chance to see that work pay off!

Battling both opponents and a raging fever, Sam Hunter placed 3rd in the Juniors, out of a field of 74. He showed great courage in continuing to play through his illness.

Monty Smith, in his very first tournament, came in at 22; he would have placed even higher if he hadn’t let his first round opponent, who he was dominating, sneak out with a stalemate! But these experiences are the reason you head away to tournaments; to learn how to play when ahead or behind, and improve your game.

In the Senior field of 70, Zac Brown and Samson Dell placed 10th and 13th (both had 4 points out of a maximum of 6, but Zac faced slightly harder opponents). Both showed great composure and played very solid games. Zac’s first four wins were fantastic, but the draw is designed to match players who haven’t lost against others in the same position; the last couple of games were against very tough opposition indeed!

All in all, it was a great success, and the young group came away having had an exciting day with lots of stories to tell. We’ll look to build on this experience for further success in the upcoming Feilding, Pahiatua and Carterton tournaments.

(Click on any image to see it larger, then click on the left or right side to step through.)